skip to main | skip to sidebar

Thanks to our web dude, Duy Nguyen, our blog has moved to 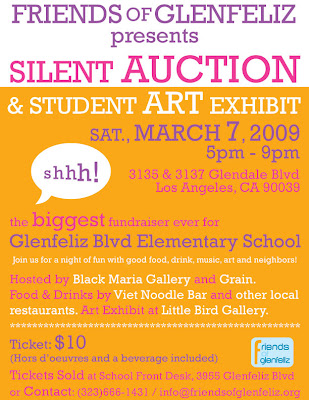 Mark Your Calendar for

Join us for a night of fun with great food, drink, music, art, and neighbors!

Please come join us at our General Meeting on

Are you on Face Book??

If you have an account with Face Book, please join our FB Group:


Topics:
-FOG Mission and Goals
-Board Member Introduction
-Fundraising Ideas and Plans
Posted by K.Nguyen at 10:12 PM No comments:

We received a letter from IRS the other day, accepting our application for 501(c)(3) tax-exempt status.

This is a milestone for our group, which officially began its mission early this year. The wait period was rather short, thanks to our esteemed Secretary/ Lawyer/ Parent, Gabriela Kornzweig!

With 501(c)(3) application behind us, we can now focus on our mission to support our children, teachers and staff at Glenfeliz Elementary. We are planning our Fall General Meeting in early October to introduce ourselves to the student body and community. During the meeting, we will talk about our upcoming fundraiser events, such as Silent Auction, Winter/Spring Fair, and Banner programs. We'll keep you posted on its date/time/location here on this blog.

Please let us know if you want to be a part of our activities; we could use your support to make our first year a big success.
Posted by K.Nguyen at 11:36 AM 1 comment:

Please join Council President Eric Garcetti and the Santa Monica Mountains Conservancy Saturday, May 3rd - 11am at 3781 Legion Lane (the dead end off of Sunnynook) to discuss a potential park site at this location.

We would love to hear your input and ideas.

A brief description of the potential project will be given, with lots of time for Questions and Answers.

Please come visit our booth at

We will have ROCK PAINTING & COLORING.

(If you could volunteer at the booth, please email us at info@friendsofglenfeliz.org)

Kudos to everyone for the great achievement made thus far! A neighborhood parents group that started out small in 2006 has now become an official non-profit organization (Booster Club) for Glenfeliz Blvd Elementary School. We will soon receive a tax exemption status from IRS!
Our communication line is being developed as we speak. Our official website is www.friendsofglenfeliz.org and you can reach us via email at info@friendsofglenfeliz.org

Here are images of our tri-fold brochure that will be distributed at ArtWater Festival on April 26, 2008. 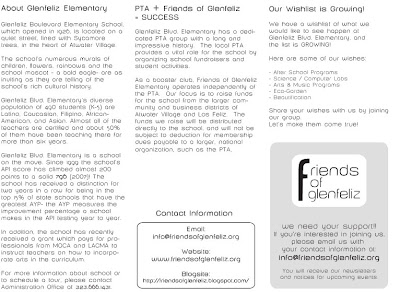 "WE TOO HAVE A DREAM"

The Los Angeles Parents Union (LAPU) is pleased to extend an invitation to you for the First Annual "We Too Have A Dream" Parents Conference happening Saturday, April 19th, 2008 at the Los Angeles Convention Center.  With an estimated 2,500 parents from throughout Los Angeles coming together to discuss ways parents can participate in improving public education, this is sure to be a historic event in Los Angeles.

The "We Too Have a Dream" Parent Conference will expand the Parents Union's successful Parent University program by engaging parents throughout LA in dialogue about the state of public education in Los Angeles, understanding key data about their neighborhood schools, navigating college preparatory curriculum as well as community resources available for families.  LAPU will also host a Parent Union Resource Fair where our community partners can provide information about their respective organizations and meet the conference participants.

Provide classes geared toward preparing parents and students for success


We look foward to your attendance.  If you are a parents union member the Conference is free!  Please register for the conference at www.parentsunion.org to learn even more about LAPU. If you have any questions, feel free to call 213-621-3052.

We and look forward to your support and participation.

I was talking to Jory last night and he suggested I post this info here as it is good news not all of you may be aware of...

First, how many of you know that Glenfeliz was awarded the same arts prototype grant Ivanhoe got a few years ago. The grant pays for professionals from MOCA and LACMA to instruct the teachers on how to incorporate the arts into the curriculum - dance, drama, painting, etc. So that is great news for all interested parties.

Also, Glenfeliz has received a distinction for two years in a row for being in the top 15% of state schools that have the greatest AYP. As opposed to just the API score, the AYP measures the improvement percentage a school makes in the API testing year to year. So the school is improving at a pretty rapid rate. I feel more parent involvement will definitely make it comparable to Ivanhoe in a short amount of time.

Finally, the Los Feliz Charter School for the Arts is planning on moving to the New Hope Church location (behind Best Buy & Costco). At this point it is controversial because it is really close to the old Franciscan pottery toxic location. The school is going through all the proper channels though and getting all the required tests needed to determine if the location is safe for kids. The school administrators kids go to the school, so they will not go there if there is any question about safety left unanswered. Jory is familiar with the school and probably can answer questions about the school better than I, but it sounds like it would be an excellent alternative school option for our neighborhood if it is safe. We will be discussing the school at the next AVNC meeting on Feb 14 (yes unfortunately Valentines Day)at 7pm at the New Hope Church. I can also send you the draft of the minutes from my committee meeting where we first discussed it if you want. Email me at twarner@atwatervillage.org

It's been a while but I have a project for some people if they want to help.

Many of the graduating 5th graders from Glenfeliz Elementary will be going to Thomas Star King Middle School next year. And when our kids are old enough that is where they will most likely be going as well. The problem is King is overcrowded to the point its basically at double occupancy. It has also been on the state fail test for ten years now when it comes to testing and is getting worse rather than improving.

About a year ago some parents in Silver Lake and Los Feliz got together and started a grass roots campaign to lobby the LAUSD to instigate a pretty dramatic overhaul of the school. I believe the plan is based on the "Green Dot" approach. Green Dot is a non-profit that has helped reorganize schools in Boston and other parts of LA and has been pretty successful in getting schools to improve pretty quickly.

Anyway, their model calls for the school to be reorganized into four separate "schools" for the different grades. Think of it as a university campus model with different "schools". Each school would have at max 500 kids and have its own principal to make it easier to keep and maintain control. They also are calling for 90% of the funds allocated to the school by LAUSD to be spent in the classroom and not the current 60% that is spent now (40% goes to "administrative costs").

So, the LA Parents Union is now to the point that they have teachers and parents on board and the LAUSD has signaled that they would be willing to talk with the group about the changes if they can get 5,000 signatures on a petition by May 30.

I went to a meeting last night and found out the goal for getting signatures in our area is about 300. I have emailed Principal Rosenblum about getting permission to have someone stand out in front of the school to get signatures and am waiting to hear back. But the school PTA could get involved and send a newsletter out to parents. We can also go to the farmers market and other locations and get people to sign there. The priority is to get parents of 5th graders to sign, then parents with kids in school, and then all local stakeholders.

Working full time I cannot do all this myself so I wanted to see if any of you would be willing to help. Obviously if all of us sign the petition that is a good head start. Please let me know if you can/want to offer up some time, as it could benefit all of our kids in the long run.

And if you want more info:

Here's another idea I had. I don't know how many of you watch Noggin with your kids but they have been playing a PSA lately a lot for a trike-a-thon fundraiser for St. Judes which is a hospital for kids with cancer. Once again I'm waiting to hear back from Principal Rosenblum to see if she's in to the idea but if she is would anyone like to help spearhead it. I talked to the St. Judes people on the phone and it sound relatively easy. They send the school DVDs and coloring books about trike and bike safety. The preschool teachers take some time out of their days for four days in a row to watch the DVDs and talk about riding safety. All during that week the parents of the kids are encouraged to donate and get others to donate to St. Jude's. The fifth day is the trike-a-thon where the kids get to demonstrate what they learned. Let me know if you are interested.

It's been almost a year since I last posted a memo here.

Time goes by, and our kids are growing FAST!

Our daughter will be starting her Kindergarten this fall, and I was wondering how you're all doing with the parental awe of choosing "the perfect school" for your child?

Our first choice remains Glenfeliz, our local favorite! But, I'm sure we're all on the same boat, asking ourselves series of questions, like "Will the school be accommodating to our child's needs?" and "How about after school programs???"

I was wondering if you guys want to get together sometime in February for an easy pot luck or pizza night? If weekend days work, perhaps we'll get together at Shane's Inspiration Playground (in Griffith Park) for a small picnic?

If you guys are still reading this blog, please respond by placing your comments. 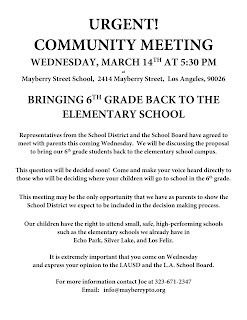 We have a new friend, "Atwater Village Newbie" blogsite.
They have posted a link to our blogsite, and vice versa.
Their site is full of interesting journals about our neighborhood.
Posted by K.Nguyen at 10:08 AM No comments:

SAVE THE DATE - 10am FEB 24 MEET & GREET WITH LAUSD CANDIDATES 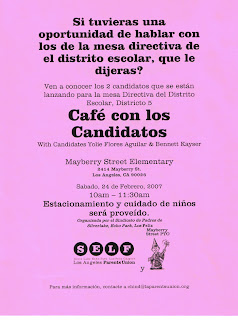 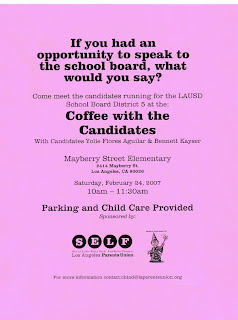 I added "Google Calendar" button on the right column.
You simply click on the button, and you will be guided to our calendar items.
The only issue is that, if you don't have a Google Account, you will have to create one and that's extra 5 minutes of your time... Once you have your Google Account, come back to our blogsite, click on the Google Calendar button, and Voila!!! a small pop up window will ask if you'd like to "add" a calendar "FOG". Press Yes, and you will have our calendar items on your Calendar.
It's a free service and a good tool for us to keep tracks of upcoming events.

If you have any questions, let me know. 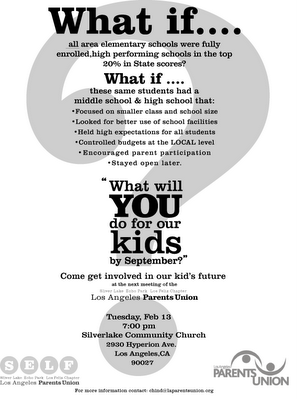 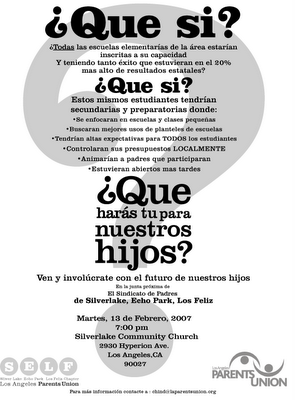 There will be an LA Parents Union meeting on:

LA Parents Union is tied into the Green Dot magnet schools program, so if anyone can attend it could and should be informative for our group. I posted a link a month or so ago to a Los Feliz Ledger article about Green Dot and the LA Parents Union, so refer back to that for more info.

Their flyer talks about focusing on smaller classes, finding a better use of school facilities, holding high expectations for all students, controlling budgets at a local level, and encouraging parent participation.